Even though the Black Panther film has been pushed back to  July 6th, 2018, this month is a perfect time to learn more about the history of  one of the first African superheroes of the silver age and golden age of comic books:The Black Panther. 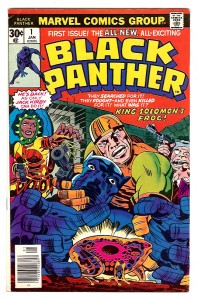 The Black Panther first appeared in a 1966 Fantastic Four comic (Volume 1 #52). According to Marvel.com, T’Challa is the heir of  the fictional African kingdom of Wakanda and the ritual leader of the Panther Clan. He receives the heart-shaped herb that connected him to the Panther god, Bast, after he studied throughout Europe and America (receiving a Physics degree) and defeated his uncle, who was Black Panther at the time.

After becoming ruler of Wakanda and advancing the country technologically, T’Challa saw other super-beings as potential threats to Wakanda. He invites the Fantastic Four to Wakanda to test them, but  teams up with them to defeat Klaw, a dutchman who wanted to take the rare metal vivanium from  Wakanda. T’Challa’s father always taught him to be two steps ahead of his enemies and three steps ahead of his friends. He joins the Avengers as a spy, but learns to trust them and to consider them as friends.

While in America he becomes a teacher and takes on the identity of Luke Charles. He fought many villains in between his time in America and Wakanda: rebel leader Eric Killmonger, Venomm, the Ku Klux Klan, the Supremacists of Azania, and Wind Eagle, to name a few. He even marries the mutant Storm in Black Panther Volume 4, #18, during the Civil War crisis.

T’Challa is a scientist, tactician, strategist and  a master of all unarmed combat forms. The heart-shaped herb gave him superhuman senses and strength, and coupled with his skills as a gymnast and acrobat, he is a deadly force. His bullet proof vibranium suit can absorb the momentum of bullets, allow him to run up walls, and his boots absorb sound and impact, enabling him to move around silently. He is devoted to Wakanda and will do anything to protect it from enemies.

Contact us if you want to learn more about the Black Panther and the comics that he’s featured in.