Politics aside, it goes without saying that since the Ferguson upheaval of last year, the Baltimore protests of recent note and the #BlackLivesMatter movement, a voice for African-American concerns and issues has coalesced with a new-found momentum. This cultural force is searching for leaders, strong voices, and sage stewards that will responsibly pursue just change and stimulate a sober conversation about current issues regarding diversity and inclusion. Comic books have always had the power to comment intelligently on current events through artistic license, whether directly, indirectly or satirically. In a surprising move, Marvel Comics has announced a courageous choice for the revamping of the iconic Silver Age comic book superhero, Black Panther.

The expression, “this is not your father’s Black Panther,” does not apply here because Marvel’s bold and brilliant choice for the scribe behind this new rendition of the African-born King of Wakanda, is a man whose father truly was part of the Black Panther political movement of the 1960’s. Ta-Nehisi Coates, an award-winning journalist, contributor to the Atlantic Monthly, writer and educator is also a comic book superfan. Born in Baltimore, Mr. Coates, 39, grew up reading comics during the mid-1980’s. Mr. Coates, accepted this project  as a way to achieve a life long dream, yet also as another facet of his creative outlets. In an interview the New York Times, Mr. Coates revealed that comics were “an intimate part of my childhood and, at this point, part of my adulthood,” he said. Adding, “It was mostly through pop culture, through hip-hop, through Dungeons & Dragons and comic books that I acquired much of my vocabulary.”

Black Panther, the first mainstream black superhero, was created by legendary comics duo Stan Lee and Jack Kirby. The character, T’Challa, is an African King and ruler of the fictional nation of Wakanda, where the powerful mineral “vibranium” is discovered. His first appeared in Fantastic Four #52 (July, 1966), led to other allegiances and eventually membership in the Avengers, and other groups, including the Fantastic Four, Defenders and other supergroups. 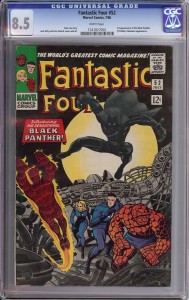 FF 52 is the first appearance of the Black Panther.

Black Panther, a title as well as a moniker in Wakanda meaning the Chief of the Tribe, predates the American political Black Panther movement. The character’s popularity after inception led to his own series and some classic story arcs, such as the 13 issue “Panther’s Rage,” which historically is considered Marvel’s first graphic novel.

This new series is about expanding the Marvel Universe’s diversity. Alex Alonso, Marvel’s Editor-in-Chief acknowledges, “It will find the hero dealing with a violent uprising in his country set off by a superhuman terrorist group called the People. It’s going to be a story that repositions the Black Panther in the minds of readers.” This will occur not only in print, but on the big screen too, when Black Panther will debut next year in “Captain America: Civil War.” Look for T-Challa to expand his cultural influence with a solo feature set to release in November, 2017, starring Chadwick Boseman, of Law and Order and CSI: NY fame.

Contact us to learn more about the fascinating story arcs of a historically important and all-around expertly written character; we possess the rare books Black Panther #1 and #3, penciled by the man himself, Jack Kirby. Truly special books in the annals of comic book history.