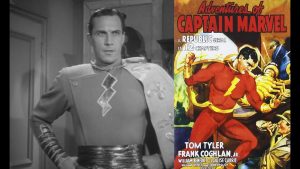 I’ll need to quantify my answer to this great question;   first, I don’t read any modern superhero comic books so I’m not up with what is going on with Spider-Man or Batman like I was when I was a regular reader (yikes- some 35 years ago), so the versions of all of these characters are the ones truest to my versions of the character mixed in with some nostalgia.

I also am not a fan or either the Marvel Cinematic Universe or whatever they call the DC one, I thought Batman Vs Superman was one of the worst things I’ve ever seen although I did see and like CIVIL WAR. These modern movies are CGI loaded so I feel like I’m watching a video game and they are overlong and frankly, boring to me, but if you like them I think that’s great, more power to you. 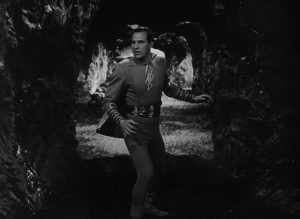 THE ADVENTURES OF CAPTAIN MARVEL (1941 Republic Pictures) – the first ever superhero production for the big screen is still my favorite and the best version of the character we now know as “Shazam”. Spoiler– he doesn’t always behave in a traditionally heroic manner, occasionally machine gunning down bad guys in the back and throwing car engines onto peoples heads but his was for the Saturday Afternoon Kiddie crowd and I can imagine them cheering as he takes out the latest bad guy. Tom Tyler was great as Captain Marvel.

THE BATMAN (1943 Columbia Pictures) – the first live action DC character was Batman in this World War II era adventure which is often maligned because of racial slurs Batman hurls at the leader of a Japanese Spy Ring– keep in mind this was made only a year after the Japanese sneak attack on Pearl Harbor so anti Japanese sentiment was high. Originally villainous J. Carrol Naish was cast as The Joker who operated out of a sinister sideshow carnival but when it was decided he would head up a Fifth Column Spy Ring the powers that be decided that was too much even for The Joker so he was changed to Prince Tito Daka of Japan. This early version of Batman keeps many of the sinister elements from Bob Kane’s earliest strips, and star Lewis Wilson does a remarkable job in the dual role of Batman and Bruce Wayne without using a gravely voice we can’t understand. 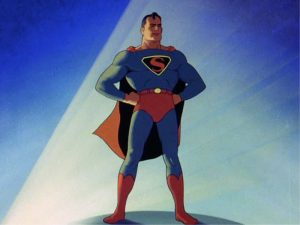 SUPERMAN THE FLEISCHER BROS CARTOONS (1941-1943 Fleischer Bros, Famous Studios) All right off the bat I’m cheating because these are cartoons, but they are an exception- These 17 fully animated cartoons play like they literally jumped off the comics pages and onto the big screen, owing a lot of their style to Joe Shuster and his studio of artists as well as the mega popular Adventures of Superman Radio Show which was airing at the time, the cartoons even enlisted the voice talents of Radio Superman Bud Collyer to provide the voice of the Man of Steel.   Beautiful and lush these are easily the best animated superhero cartoons ever made.   Superman, it should be noted, had the best luck of all superheroes in terms of adaptions, from the 50s TV series up through Christopher Reeve’s excellent SUPERMAN THE MOVIE in 1978) the character was a smash in nearly every reimagining. It wasn’t until Brandon Routh donned the costume in SUPERMAN RETURNS (2006) that the character took a darker turn and audiences turned away.

FANTASTIC FOUR (1966 Hanna Barbera) – Many of the stories used in this animated series were adapted straight from the Marvel Comics FF Series while featuring solid animation and a stable of veteran voice actors including Gerald Mohr and Paul Frees. A close runner up to this one is the 1970s college radio series produced by Marvel Comics and starring, of all people, Bill Murray as Johnny Storm. Those short radio shows played on college stations and adapted stories straight out of the comic books. 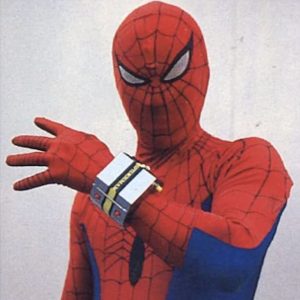 SUPAIDAMAN – in 1977 Japan produced a Spider-Man TV series that was outright bonkers, giving Spider-Man the powers from a demon out of hell and a giant robot to help him battle those pesky oversized monsters that attack Tokyo on a regular basis. This one features a really great comics accurate costume and some truly amazing special effects with no CGI!! Well worth looking into and a lot of fun!

CAPTAIN AMERICA: FIRST AVENGER (2011) – Okay I said I don’t like the Cinematic Universe and I don’t but Cap has had the worst luck of any big name comic book character in terms of getting adapted to a different medium. First there was the 1943 Republic Pictures serial which changed everything from his costume to his supporting cast and even Cap’s secret identity, then there were a pair of 70s movies which while fun were extremely loose with the Cap concept and made on the cheap. Speaking of cheap in 1990 some Eastern European Film Company attempted a Cap movie which rates a miserable 3.3 on IMDB and probably falls below the TV Movies in terms of quality, so that takes us to Chris Evans 2011 movie which was faithful to most things Cap and gave us the first decent take on the character.

IRON MAN (2008) Before there was a cinematic universe with hundreds of characters vying for screen time in each other’s movies there was Robert Downey Jr making his debut as millionaire industrialist Tony Stark who comes up with the Iron Man armor and gets himself into and out of jams. It’s actually a really good movie and it sets up all of the rest that follow. 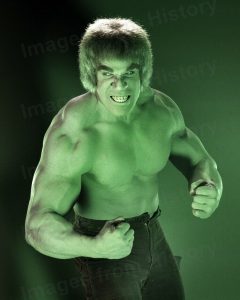 THE INCREDIBLE HULK (1977-1982) – Even though it plays almost identically to THE FUGITIVE which aired a decade earlier, and Lou Ferrigno’s Hulk is clearly just a guy in green paint, Bill Bixby sells himself as David Bruce Banner who has a terrible secret he has to hide all the while running from town to town to avoid the reporter who is hot on his heels.  It’s entertaining, it’s sincere and I personally like a Hulk that doesn’t look like the actor playing Banner which matches more to what Lee and Kirby did with the original run.

WONDER WOMAN (1975-1979) – I’m sorry Gal Gadot fans, the 70s series starring Lynda Carter is still the best version of Wonder Woman, especially the first season which was set during World War II. Lyle Waggoner played her love interest Steve Trevor in a particularly clueless way but the series overcomes that with Carter’s fantastic portrayal of the Amazon Princess who comes to our world to fight for what’s right.