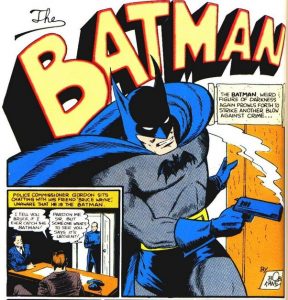 Batman first blasted his way into the comic pages as the bloodthirsty avenger known as The Bat Man blasting his enemies with his .45 automatic or pushing the bad guys into a vat of acid with little remorse. A year later Robin came along and Batman softened, becoming more of a father figure and less a grim avenger of the night in the vein of The Shadow.

By the end of the 1940s superhero comics had begun a decline in sales which affected most of the major publishers and even DC Comics reduced their output to their three iconic heroes Batman, Superman and Wonder Woman. Batman started the decade on solid footing with a fresh new Batmobile designed by master creator Dick Sprang and some great stories featuring some of his iconic villains including Catwoman, Two-Face and The Joker.

Batman’s sales started to flounder around 1953 coincidently as Superman’s sales started to soar spurred on by the success of his syndicated TV Series THE ADVENTURES OF SUPERMAN with George Reeves in the title role. The show’s success brought Superman’s Comic Book sales back to the glory days of the Golden Age of Comics and new Batman editor Jack Schiff took notice and decided the best way to course-correct Batman’s flagging sales was to make him more like Superman. 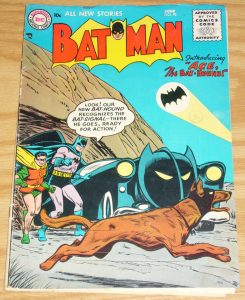 While Batman had gotten his own version of Lois Lane in the form of Vicki Vale in BATMAN #49 (Oct. 1948) with the new direction Batman got a pet dog to match Superman’s Krypto in the form of Ace the Bathound in BATMAN #92 (Jul 1955), Batwoman in DETECTIVE COMICS #233 (Jul 1956) and his own version of Superman’s impish nemesis from the fifth dimension Mr. Mxyzptlk when Bat-Mite was introduced in DETECTIVE COMICS #267 (May 1959).

BATMAN #113 (Feb 1958) brought us full Superman homage as Batman became the “SUPERMAN OF PLANET X!” in a story that had Batman landing on a strange planet where his Earthly powers granted him the same level of super powers that Superman has here on Earth.  Kind of makes your head hurt. 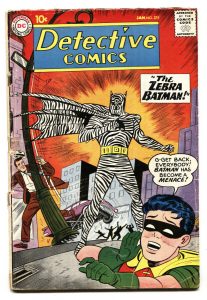 The Batman Family was overflowing and it’s a wonder he didn’t get his own Pal ala Jimmy Olsen with Superman. Batman struggled to keep his dignity in stories that featured him in various colored versions of his batsuit in “The Rainbow Batman” in DETECTIVE COMICS #241 (March 1957) into the start of the new the decade in the bizarre “Zebra Batman” story in  DETECTIVE COMICS #275 (Jan 1960).

Batman became Bat-Baby in BATMAN #147 (May 1962) after a criminal hit him with a ray that turned him back into a four year old, while still retaining the strength and mind of an adult, it didn’t stop Batman from going out on his nightly crime patrols striking fits of laughter into evil doers rather than fear. 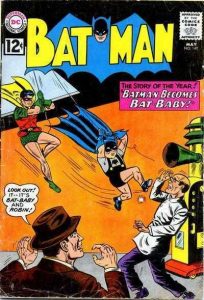 The dark period of Batman comics ran from about 1953-1963 before DC Comics would again try to save Batman, this time by adopting a “new look” and added realism to a comic book which had become far too silly.

Superworld Comics has been in business for thirty years, buying and selling vintage comic books!  If you’ve got a collection you are ready to part with give us a call at the number listed at the top of the website, and be sure to tune in to Instagram for Superworld Live Shows;  Teddy’s Treasure Chest Tuesdays is on at 6pm and Lunch With Jose is on Thursdays at 1pm.  Each show features great comic books at bargain prices and check out our website for thousands more books available!