When the Batmobile gets brought up in conversation (really though: which one would you rather own?), the image that is often conjured up in our minds is the sleek lines of the finned car made popular throughout the years in the pages of the comics as well as the television and silver screens.

The Batmobile, however, had much different beginnings than many non-Batman fanatics realize. It made its first appearance during the Golden Age and went through quite a few revisions during that era. 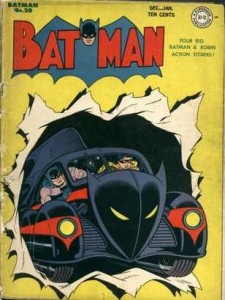 The Batmobile on the cover of Batman #20 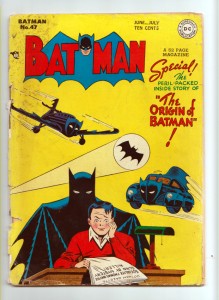 Redesign of the Batmobile in Batman #47

Many of these titles are available right here at Superworld Comics, Inc. Always feel free to contact us to find out what we have in stock, or to see if we can help you find Silver Age comic books, Golden Age comic books or comic book original art.

we're ALMOST at 100 episodes and ted is starting t

Guess the grade answer 8.5!! Sorry for the delay.

After weeks of a break, Jose has decided to take t

hey guys-- the new paypal business policy is both

THE BOYS ARE BACK IN TOWN! Come hang with us at 6

An amazing Ditko Cover to get the weekend off to g

TONIGHT! LIVE AT 6! Ted is back from the San Diego

Some highlights from comic con! . . . #igcomicfa

THE WALL AT COMIC CON!

IN ONE HOUR: We'll be going LIVE for Treasure Ches