Golden Age of comic books superheroes are not the only ones that get reincarnated for blockbuster film productions. Case in point, the return of megavillain, Lex Luthor is upon movie going audiences in DC Comics’ anticipated Batman vs. Superman: Dawn of Justice, set for a 2016 release.

One of the most enduring and lasting archvillians, Alexander Joseph “Lex” Luthor has battled the forces of good in Metropolis since his first appearance in Action Comics #23, published in April 1940. The megalomaniacal, CEO of LexCorp has had a rich history in comics as a bold, supergenius who carefully manages his public persona embodying philanthropist, tech-guru, scientist, benefactor, and politician. Luthor has even been elected President of the United States in past stories. His power-hungry schemes for domination and control of Metropolis are always thwarted or challenged by his greatest rival Superman. Their histories are intertwined, with backdrop stories reaching back to the days of Superboy. In 1960, a story by Luthor’s creator, Jerry Siegel, revealed that Lex was a childhood friend of Superman. An intervention by Superboy to save Luthor from a being he was growing in vitro led to an explosion in his nascent laboratory. The ensuing fire left Luthor bald, and began the lifelong hatred and disdain for Superman’s alien powers. 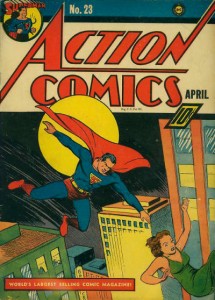 In the upcoming production by director Zack Snyder, Lex will be played by Jesse Eisenberg, who famously portrayed Facebook CEO Mark Zuckerberg in David Fincher’s The Social Network (2010). I guess you can say this will not be Mr. Eisenberg’s first time playing a philanthropic, tech-savvy billionaire with a power complex.

Here at Superworld Comics we are well versed in this supervillains history, and have the historic comics to prove it: Action Comics #177 is a particular classic. Contact us to reach back into the history of this and other great villains of the Golden and Silver Age of Comics.