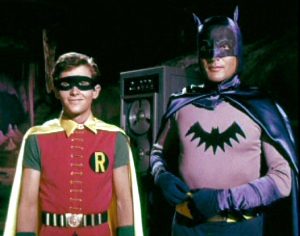 The 1950s ADVENTURES OF SUPERMAN TV series starring George Reeves had been a money maker for National Comics (now known as DC Comics) since having the character appear on the new medium of television was a way to advertise the various comic books he appeared in for them, and there was no shortage; at the time of the show the character was appearing in SUPERMAN, ACTION COMICS, WORLD’S FINEST COMICS, SUPERMAN’S GIRLFRIEND LOIS LANE and SUPERMAN’S PAL JIMMY OLSEN. This sparked a publishing boom for the company and as the 1960s came in they hoped to duplicate that success.

Their first thought was another Superman series but with the death of actor Reeves recasting seemed morbid, they attempted a SUPERBOY TV Series but it didn’t capture the audience. Batman was a natural second choice and in 1964/65 CBS-TV and producer Ed Graham began developing BATMAN as a Saturday Morning TV Series in the spirit of ADVENTURES OF SUPERMAN and THE LONE RANGER. Former LA Rams player Mike Henry, who would soon take on the role of Tarzan on the big screen, was tapped to play Batman and rumors persist that he was even dressed in a Batman costume for publicity photos but none seem to actually exist. 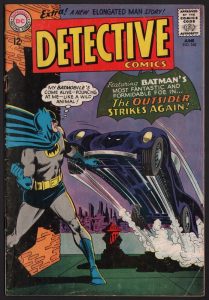 The CBS show soon stalled out and National Comics optioned the character to 20th Century Fox who worked out a deal with ABC-TV and producer William Dozier was assigned the task of bringing the show together. Dozier was only vaguely familiar with the character and read a stack of BATMAN COMICS on a cross country plane trip which only made him doubt this could be accomplished successfully. It was only when he brought in writer Lorenzo Semple that the two of them decided the best way to do it was to go over the top, with full color (most series at the time were black and white) and twice a week episodes that would leave a cliffhanger ending between the two hopefully getting viewers to tune into the second installment, the same way the old movie serials had been done (and Batman appeared in two old movie series first in 1943 and later in 1949 for Columbia Pictures). 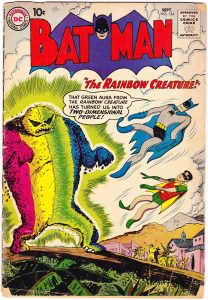 BATMAN (1966) Is often maligned by diehard comic fans because its seen as a parody of Bob Kane and Bill Finger’s dark avenger but when we look at the comics of the period of the mid 1960s we see that at least the first season of episodes which started airing in January of 1966 are very faithful to the source material. The first appearances of major villains The Joker and The Penguin and the pilot which featured The Riddler took a villain from the comics who had only appeared once or twice before and made him a major enemy, encompassed the series’ first three story arcs and all were extremely faithful both in costume and storylines to their comic book appearances. 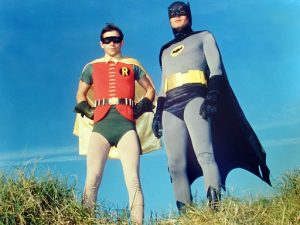 The costumes for Batman and Robin, worn by Adam West and Burt Ward, mark possibly THE most faithful visual adaption from page to screen in the history of live action comic adaptions. Costumer Jan Kemp spent countless hours trying different fabrics and shades of color to get the looks just right and it pays off in the end result.

The show itself was a monster hit, sparking what was then called BATMANIA creating a wave of Batman merchandise unseen or heard of by any other comic publisher completely overshadowing Superman’s success on screens a decade earlier.   Batman Comics sales reached into the millions for the first time since the 1940s and he began appearing in an array of National Titles including BATMAN, DETECTIVE COMICS, WORLD’S FINEST COMICS, JUSTICE LEAGUE OF AMERICA, BRAVE AND THE BOLD and guest starring in nearly every title National published during this period. 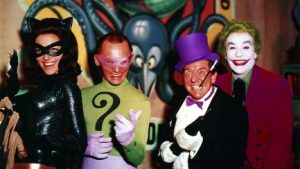 As the series went on Lorenzo Semple had moved on to feature films and subsequent writers failed to understand what had made Semple’s scripts work so well which caused the series to devolve to camp which found the Third and Final Season virtually a parody of the First.

Throw stones if you want to but if you watch the best of the series episodes you’ll find a virtual 3D adaption of the comics being published by National in the 1960s.

Check our website for thousands of great comics available for sale, and our SHOW SCHEDULE to see if we’re going to be appearing at a show near you!  If you or someone you know has a comic book collection they’d like to sell, shoot us an email at Ted@superworldcomics.com or 508-UBWACKY (508-829-2259) because we pay some of the best prices for comics and collectibles so reach out!