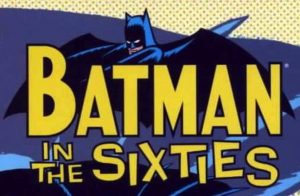 The 1966 Batman TV Series was a blessing and a curse depending on who you ask and which side of the coin you like your Batman on.   Often blamed for making fun of Batman the truth is DC Comics was doing some pretty silly things with Batman long before the TV Show came along.   There were also a lot of great Batman covers in Detective Comics during the time frame but we’re focusing on the main Batman title this time around. 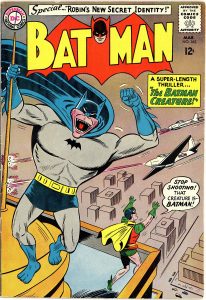 As shown above, two years BEFORE the TV Series Batman was often subjected to Alien Invasion, costume conundrums and as in this case monstrous transformations.    Silliness was often the norm with DC’s titles which were clearly aimed at a younger audience and Batman’s sales suffered for it.

In June 1964 editor Julie Schwartz was assigned to revamp Batman the same way he had done years previously on THE FLASH and GREEN LANTERN.   Schwartz changed the artists assigned to ones with a more realistic style and introduced a sometimes sinister element to his stories that hadn’t been prevalent since the 1940s. 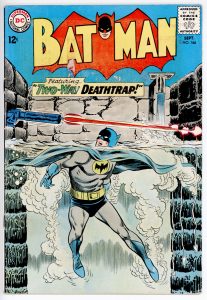 Just a few issues later in Batman #166 our hero was now facing a much more serious threat in the form of a death-trap— something that the TV Series would latch onto.   Cover artist Carmine Infantino’s style added a great deal to the look and feel of these covers and it was clear that DC had introduced something new with their Caped Crusader.

The 1960s are loaded with great BATMAN covers but my personal favorites are the ones that have a “click-bait” or horror element to them. 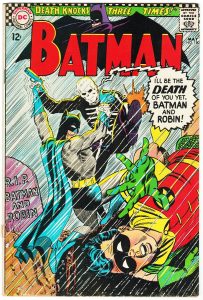 Batman #180 May 1966- released at the height of the popularity of the TV Series this evocative cover by Gil Kane and Murphy Anderson featured the debut of the villainous Death Man who was straight out of nightmares. 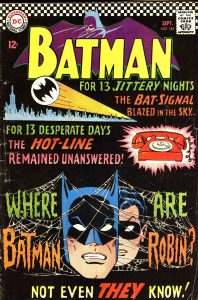 Batman #184 Sept 1966 Not to be outdone, Carmine Infantino teamed up with Anderson to do this great black cover with moody type giving us the ultimate click-bait/horror cover— to this day I still want to know what happened to them— and I’ve read the comic several times! 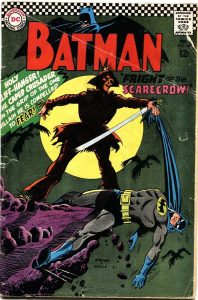 The Scarecrow is featured on the cover of BATMAN 189 Feb 1967— this moody cover features a huge full moon and a sinister color scheme that evokes the earliest Batman stories from the 1940s.   Interesting to note there is a fan letter in this issue from future Comic Book writer Mark Evanier. 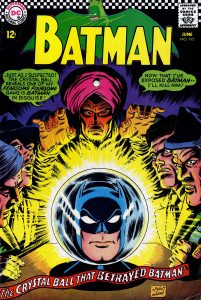 BATMAN #192 June 1967 Mystics have always been spooky and this cover is no exception as displayed in the great dark color scheme.    This one is another winner by Infantino and Anderson. 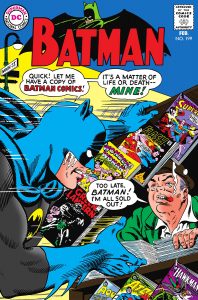 BATMAN #199 Feb 1968 – Although not a horror cover how could you have passed this one up on the newsstands?  Batman desperately looking for the latest issue of his own comic and he can’t find it!  Coincidently Batman Comics were selling in the millions of copies during the 1966-1968 run of the TV series so he wasn’t the only one looking for a copy of his own book.

BATMAN #202 Jun 1968 – The TV Show was cancelled by this point so maybe the headstone is for the show?   Great super moody cover by Irv Novick completely returns Batman to his horror roots with this one throwing some shade at the idea that Batman stayed campy until Denny O’Neil and Neal Adams took over the title. 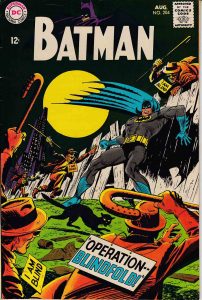 BATMAN #204 Aug 1968 – The first part of the Blind Man saga is incredibly spooky in another Novick winner.  The big moon, the black sky and the black cat give this a Halloween feel.  #205 is almost as creepy with Batman and Robin reflected in the lenses of a blind man’s glasses. 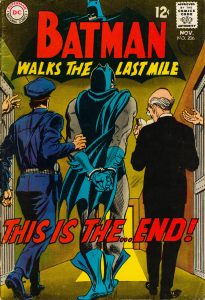 BATMAN #206 Nov 1968 – Novick was the regular Batman artist by this time and this cover really begs the question how in the world can Batman be on Death Row?   Another over you couldn’t have passed up on the newsstand in the late 1960s. 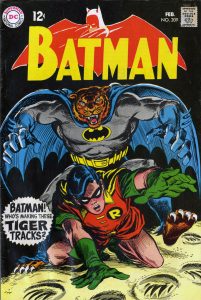 BATMAN #209 Feb 1969 we close out the 1960s with a cover that offers us probably the most horroresque of the era with Batman having transformed into a Tiger for some reason!   Want to know what happened?  You would have to plop down your money to find out.

The sixties ended and we headed into the 1970s which ushered in the Bronze Age of Comics which featured some of the best horror related Batman covers of the era.

Check our website for thousdands of great comics for sale and remember to tune in to Instagram Live Tuesdays at 6PM EST for TREASURE CHEST TUESDAYS with TED and on Thursday at 1PM for LUNCH AND DEBAUCHERY with Jose!