Ultron, soon to appear in the upcoming blockbuster Avengers: Age of Ultron, is one of the most important villains in the history of Silver Age and Bronze Age comics. He has not only proven himself to be one of the Avengers‘ toughest and most resilient foes, but (despite being a robot) he also has some of the most interesting familial relationships in the Marvel universe.

Ultron was created by writer Roy Thomas and artist John Buscema.(One of the more exciting Marvel Characters NOT created by Kirby or Ditko!) He first appeared in Avengers #54 (1968), as the cloaked Crimson Cowl, leader of the supervillain group Masters of Evil. He revealed his face (but not his true name) on the final page. In the next issue, he announced himself to be “Ultron-5, the living automaton”. 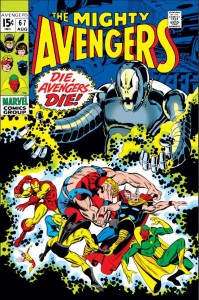 It was eventually revealed that Henry Pym (Ant-Man) had created an advanced robot named Ultron-1, using his own thought patterns for its artificial intelligence. Ultron-1 had developed an Oedipus complex: an irrational hatred of his “father” Pym and an infatuation with Pym’s girlfriend Janet Van Dyne (Wasp). He had erased all memory of his existence from Pym’s mind via hypnosis, then upgraded his own strength and capabilities several times, changing his number with each upgrade (Ultron-2, Ultron-3, Ultron-4, and finally, Ultron-5).

When his initial attempt to destroy the Avengers was foiled, Ultron-5 resolved to find a new way to succeed in his goal. He abducted Professor Phineas T. Horton, creator of the Golden Age Human Torch (a powerful android created in the 1940s, not to be confused with the Human Torch of the Fantastic Four), and forced Horton to overhaul the Human Torch into a “synthezoid” (soon to be known as the Vision) designed to destroy the Avengers. When Horton betrayed Ultron by leaving the Vision’s memory of his past life as the Human Torch untouched, Ultron killed him. The Vision tried to destroy Ultron, but was defeated. Ultron reprogrammed the Vision’s mi nd with the thought patterns of the deceased Wonder Man (who, upon his eventual resurrection, came to consider the Vision his brother), implanted him with a device with which he hoped to control him, and sent him to lead the Avengers into a trap. The Vision initially attempted to carry out Ultron’s bidding, but the Avengers soon convinced him to join their side. Just as Ultron had turned against his “father” Henry Pym, his own “son” the Vision now turned against him. The Vision destroyed Ultron by tricking him into hitting the delicate electrodes on his head, causing his body to explode.

Despite Ultron’s body having been destroyed, his head (and his consciousness in it) had survived. He took over the Vision’s mind, and made him rebuild his body with the near-indestructible metal adamantium (thus becoming Ultron-6). However, he was again defeated and destroyed. His head again survived, and he was later rebuilt as Ultron-7. He then fought the Avengers, Fantastic Four, and Inhumans; and was yet again destroyed…for the time being.

Ultron was eventually rebuilt as Ultron-8, and made another addition to his family tree. He created a robotic wife namedJocasta (named after Oedipus’ mother) for himself, and brainwashed Henry Pym into transferring the mind of Janet Van Dyne (by then Pym’s wife, and thus arguably Ultron’s “mother”) into Jocasta. The Avengers defeated Ultron and transferred Janet’s mind back into her body, leaving Jocasta without a mind. However, Ultron was able to later revive Jocasta, as she had enough of Janet’s thought patterns imprinted in her to allow her to redevelop a mind. Jocasta, like the Vision, turned against Ultron. She had an on-and-off membership in the Avengers for years to come.

Throughout the Silver and Bronze ages, the many Marvel stories featuring Ultron showcased the interactions of his odd and dysfunctional family. Later, in the Modern Age of comics, Ultron’s list of kin grew even larger, eventually coming to include

(another robotic “wife”) and Victor Mancha (Ultron’s cyborg “son”), among others.