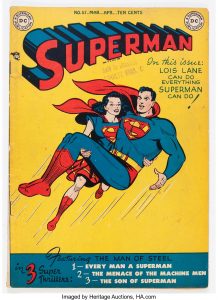 Back in the days when SUPERMAN Comics sold in the hundreds of thousands of copies (sometimes topping a million) comic artists depicted the Man of Steel as more of a fatherly figure than a pinup boy.

Joe Shuster, Curt Swan and even the amazing Fleischer Bros Studio gave Superman a barrel chest and a somewhat wide waist, it’s a shame comic publishers of today would run screaming from such a depiction today.

Superman was never bigger (literally and figuratively) than he was in the 1950s, that post WWII era of American prosperity and returning veterans often depicted dads like Dwight Eisenhower as legitimate heroes, and Superman was taking the nation by storm in the new genre of TV in a syndicated show starring actor George Reeves.

Reeves was fit but he wasn’t a muscle bound weightlifter, in fact much of his muscle was padded in the suit and it’s no coincidence that one of Superman’s premiere artists of the time followed this pattern of dad body style.

I speak of Wayne Boring.

Wayne Boring was born June 5, 1905 in Minnesota and shortly after Jerry Siegel and Joe Shuster launched Superman in 1938 he found himself one of a roster of ghosts providing material for the character who was now appearing in ACTION COMICS as the lead story, in four adventures in his own title SUPERMAN and as the lead in WORLD’S FINEST COMICS as well as an occasional guest spot in ALL STAR COMICS, Superman was a busy boy.

Boring rose the ranks, eventually becoming Shuster’s favorite ghost and soon he found himself handling the art duties when Superman made the jump over to daily comic strips. In 1942 National Comics (now known as DC Comics) hired Boring as a staff artist and when Siegel and Shuster were fired by DC Comics after losing a lawsuit about Superman’s rights Boring was placed on the main title along with Curt Swan and Al Plastino.

Boring also got work at other companies during the mid to late 1940s and as was so often the case he would use a pseudonym when he was moonlighting, in his case calling himself Jack Harmon. 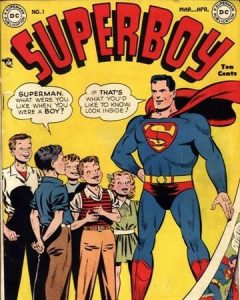 Boring and Batman co-creator Bill Finger developed a more detailed origin story for Superman in issue #53 (July 1948) to mark the tenth anniversary of his publication.   Boring and writer Jerry Coleman created the Fortress of Solitude in Action Comics #241 (June 1958) and the Bizarro World in Action Comics #263 (April 1960) with writer Otto Binder.

Boring remained the main Superman penciler through the 1950s although Curt Swan would rise to prominence in the 1960s before he was fired from DC Comics in 1967 after making demands for health and retirement benefits.

From 1968-1972 Boring found work ghosting backgrounds for Hal Foster’s Prince valiant before drawing three issues of CAPTAIN MARVEL for Marvel Comics before retiring from art to work as a bank guard.   Through those years Boring would still take on commission work and he would sell the vast collection of SUPERMAN DAILY STRIPS he had acquired often drawing in a little Superman when one wasn’t present in that particular day. 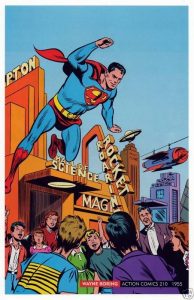 Today’s Superman artists could learn a lot by looking at the work of Wayne Boring.

Check our website for thousdands of great comics for sale and remember to tune in to Instagram Live Tuesdays at 6PM EST for TREASURE CHEST TUESDAYS with TED and on Thursday at 1PM for LUNCH AND DEBAUCHERY with Jose!