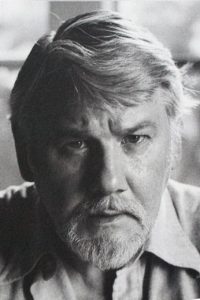 Alexander Toth (Rhymes with Both) was born June 25, 1928 in New York City.  The son of Hungarian immigrants Toth’s illustrative abilities were noticed by a junior high school teacher who urged him to enroll in The School of Industrial Art which was a career high school for commercial illustration. He sold his first illustration at the age of 15 to Heroic Magazine, Toth was heavily influenced by comic strip artists Milt Caniff, Alex Raymond and Hal Foster and initially wanted to break into newspaper strips. Toth suspected the days of adventure comic strips were dying so he focused instead on the new medium of Comic Books.

Graduating from the School of Industrial Art in 1947 Toth approached DC Comics artist Irwin Hasen, creator of Wildcat and the current artist on Green Lantern (the Alan Scott version) which lead to Hasen introducing Toth to editor Sheldon Mayer who hired him for DC Comics and soon put him to work on a variety of titles including GREEN LANTERN #28, ALL STAR COMICS 38-41 which introduced Black Canary to the team, GREEN LANTERN #30 and eventually the Golden Age Version of The Flash, Doctor Mid-Nite and the Atom. 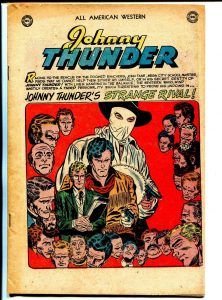 Toth enjoyed superhero comics but he was more comfortable when the company moved him over to western titles like ALL STAR WESTERN and Johnny Thunder. Toth’s work soon became complimented as the work of an artists-artist, a term which reflects the opinion of artists rather than fans who are often more critical of the technical aspects of an illustration, and his ability to render action and mood with just a few lines garnered him a legion of professional peer fans.

In 1954 he was drafted into the US Army and stationed in Tokyo, Japan. While there he wrote and drew his own weekly adventure strip, JON FURY, for the base paper, Depot Diary. One of his biggest thrills was to have enlisted men stop him as we walked through camp and have them ask him what was going to happen next to their hero? 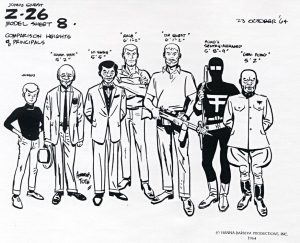 Returning home in 1956 Toth settled in Los Angeles and worked mostly for Dell Comics until 1960 before taking the art director job for the Space Angel animated series which eventually led to him being hired by Hanna-Barbera who was one of the only animation studios to have cartoons airing at prime time with THE FLINTSTONES. Hanna Barbera wanted to branch into adventure series after gaining the rights to the former radio drama JACK ARMSTRONG THE ALL AMERICAN BOY which was being developed by fellow comic book artist and former Space Angel artist Doug Wildey. Toth accepted the job hoping it might lead to an animated version of Milt Caniff’s TERRY AND THE PIRATES. The JACK ARMSTRONG project failed to materialize but Hanna Barbera took the concept in a slightly different direction and released JONNY QUEST which proved to be another prime time success. 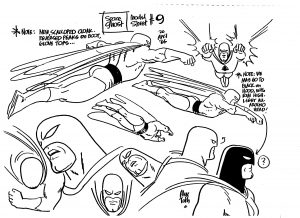 Toth stayed with HB for many years creating such characters as SPACE GHOST, THE HERCULOIDS, BIRDMAN AND THE GALAXY TRIO and DINO BOY IN THE LOST VALLEY. In addition to character designs he did storyboards for the company before being sent to Australia to work on the companies newest project SUPER FRIENDS.

Throughout all these projects Toth continued to work in comic books drawing the first issue of THE WITCHING HOUR for DC Comics in 1969 and contributing to Warren Publishing’s EERIE and CREEPY Magazines  DC Comics art director desperately tried to get Toth to contribute to his successful BATMAN BLACK AND WHITE Series eventually getting him to do the cover to issue #4 of the original series in 1996, which became his last work for the company.

Toth was responsible for inspiring countless professionals and is one of the few true giants of the comic book industry able to lay claim to the title of Greatest Comic Book Artist of All Time. Check out Tothfans.com for more information.

Check our website for thousands of great comics for sale and remember to tune in to Instagram Live Tuesdays at 6PM EST for TREASURE CHEST TUESDAYS with TED and on Thursday at 1PM for LUNCH AND DEBAUCHERY with Jose!