THE AMAZING WORLD OF DC COMICS 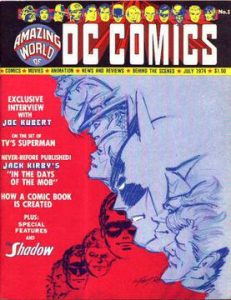 Marvel Comics and DC Comics have had a long rivalry that goes beyond who has the better characters, or which universe is more interesting. Both companies had been around since the 1930s, DC First in 1935 and Marvel then appearing as Timely Comics in 1939. Both companies existed through WWII and into the era of the Comics Code where DC Comics continued publishing the adventures of their superhero trio Superman, Batman and Wonder Woman, while Timely, now known as Atlas Comics, was reduced to publishing kiddie type monster books before a golf game between the two publishers lead to the creation of The Fantastic Four after the success of The Justice League. That is another story, but it goes without saying when one of the companies did something, the other took notice and followed suit, even though DC Comics tried to insist they paid Marvel no attention because they felt the work they produced was sub-par.

In the late sixties Marvel Comics published their own fanzine, which is kind of like being the president of your own fan club and when MARVELMANIA came to an end they revamped the idea in 1973 as FOOM (Friends of Ol’ Marvel) which ran for a respectful run. DC apparently came up with their own Fanzine idea on their own and assigned new hire Bob Rozakis and Paul Levitz and featured behind the scenes looks at the comic publisher as THE AMAZING WORLD OF DC COMICS. 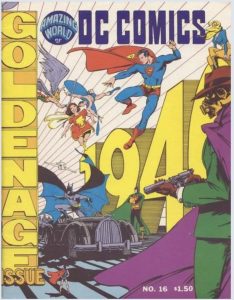 Consisting mostly of text articles and press blurbs for upcoming comic titles featuring sneak peaks at the artwork the title offered a look at the inner workings of the giant comics publisher. The first issue featured a cover by publisher Carmine Infantino and included an interview with Joe Kubert, a visit to the set of TV’s ADVENTURES OF SUPERMAN series which had been off the air for more than a dozen years by this point, a look at new work from Jack Kirby, who had been lured over from Marvel Comics, a feature on how a comic book is created and a feature on the newly acquired license for a comic book based on the pulp hero THE SHADOW.

Contributors included Ramona Fradon, Steve Skeates, Michael Uslan (now the executive producer of all Batman films), Wally Wood and in one of his few credits away from Marvel Comics, Mark Gruenwald.

Published Bi-Monthly some of the highlights during the run included a memorial recognition of Batman co-creator Bill Finger, cartoons by Sergio Aragones, and looks at DC Comics forays into the world of Hollywood with the Fleischer Bros Superman Cartoons, the Batman movie serials, the Superman TV Series and much more.

Superworld Comics has been in business for thirty years, buying and selling vintage comic books! If you’ve got a collection you are ready to part with give us a call at the number listed at the top of the website, and be sure to tune in to Instagram for Superworld Live Shows; Teddy’s Treasure Chest Tuesdays is on at 6pm and Lunch With Jose is on Thursdays at 1pm. Each show features great comic books at bargain prices and check out our website for thousands more books available!