The Black Terror originally appeared in Exciting Comics #9 published in January of 1941. A lesser known hero now, The Black Terror’s background is that of a pharmacist named Bob Benton. The back story is that Bob Benton concocts a chemical that grants himself superpowers, as well as his crime-fighting side kick Tim Roland. Together, they’re known as the “terror twins”! 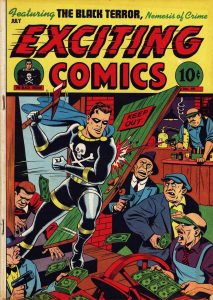 The Black Terror was one of the most popular heroes of his time, making quarterly solo appearances, as well as the lead feature in America’s Best Comics and Exciting Comics up until 1949. As a character in the public domain, The Black Terror was relaunched many times throughout the 80s, and again in the 2000s. 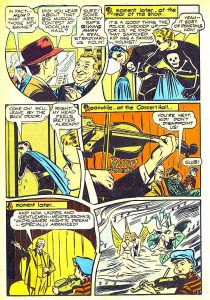 Page from The Black Terror #22
Drawn by Frank Frazetta

We have a few Black Terror books in stock here!