Crisis on Infinite Earths took a break over the holidays and picked right back up where it left off. Did the anti-monitor wipe out all life on earth, did Oliver become the embodiment known as the Spectre? Crisis’ fourth chapter entails the six paragons and Lex Luthor spending a long time coping with the lose of everybody in the multiverse. Oliver Queen devises a plan: Half of the paragons will distract the anti-monitor, and the other half with travel to Maltus to prevent a younger monitor from meeting his counterpart. Oliver Queen (the Spectre) gives Barry a power boost to access the speed force, and the plan is set in motion.

Image via the CW

Things instantly fall apart. Barry and the various other paragons get trapped in the speed force after the anti-monitor attacks. Barry has to travel through time to specific memories of Olivers to recover them, or else they’ll become consumed by anti-matter. 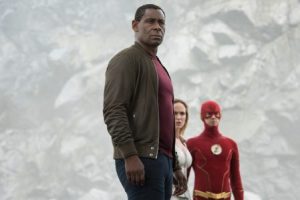 Image via the CW

As certain heroes (Supergirl, Ryan Choi, Lex Luthor) arrive on Maltus, they convince the monitor to not travel to the dawn of time. However, the multiverse rule still applies. Even if the monitor they convinced didn’t cross paths with the anti-monitor, at least one across all the universes will. The paragons will hold the line while the Spectre rebirths the multiverse. He dies, but the day is saved. All the heroes are now on a single earth.

As the Anti-Monitor is still around trying to kill off the paragons, the heroes split up into teams to try and save the day. While the other heroes fight the anti-monitor, Ryan, Ray Palmer, and Nash Wells attempt to keep the Anti-Monitor in the micro verse. The Super Friends come about as they build a memorial to Oliver in the STAR labs that Barry owns. For the first time in the series, the future is truly unknown.